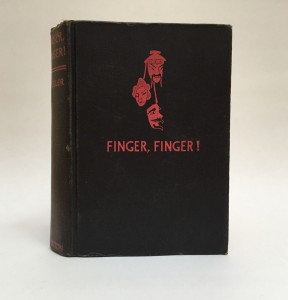 By far, the best place to start with Harry Stephen Keeler is the titles of his oeuvre, which flop around in one’s mind: The Skull of the Waltzing Clown, X. Jones — of Scotland Yard (nicely paired with Y. Cheung, Business Detective), The Face of the Man From Saturn, and the immortal Finger, Finger! (exclamation point sic).

We originally became aware of Harry Keeler visiting a used & rare bookstore in Austin. We ran across a copy of Finger, Finger! on a shelf in the Mystery section. Always on the alert for the ridiculous and/or sublime, we were drawn in for a closer look and saw on the shelf that there was a run of unusual titles all by the same author.

The “Has Also Written” note in Finger, Finger! revealed that Mr. Keeler was prolific, and possessed of a unique sensibility in naming his books (The Defrauded Yeggman, The Man with the Wooden Spectacles, and so on, far beyond the few titles in evidence in the shelf). The chapter titles in Finger, Finger! are also unforgettable: For Nippon!, Mr. Whosis Reveals the Facts!, Concerning One, Hideo!, —And in the Meantime!, and so on. That’s just the first few chapter titles with exclamation points, there are several gems in there. 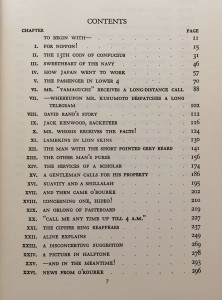 After this promising exploration of the surface area, does the book live up to the title? Happily, yes. The original dust jacket copy offers the following:

If only Japan could lay her hands on the Thirteenth Coin of Confucius which was floating around somewhere in the United States, she could thwart a certain Chinese ambition. The Japanese Secret Service in New York City had a clue and immediately a Japanese Secret Service Agent boarded the Chicago Flyer and never took his eyes off a white passenger with a short grey beard. It was the passenger’s “Dryo” raincoat that the Secret Agent had his eye on, and at the first opportunity he grabbed it and substituted a duplicate. In a lightning fraction of a second, he shot his hand into the pocket. In the leather purse he found not the sacred gold piece, but a dead finger wrapped in cellophane…

…and the book goes on from there. Many characters have ridiculous names (Drinkwater Dorr, Hoot Carboy, O. O. O’Hennesy), the writing is like the first draft of a book padded because the author is being paid by the word, [1] and there are many, many exclamation points throughout. Characters’ dialogue is often written in a weird phonetic transcription of an accent, which results in stuff like, “Dat’s w’y I start to tell youse bot’ about de ol’ lady I picked up after I clumb outa th’ purty lil fron’ yard up de street here.”

Eventually, almost all the details in this 536-page book feel superfluous. The copy we found in Austin apparently never had a reader finish the book; the last few chapters had an untrimmed fore-edge which we had to cut to find out who did it. Spoiler Alert: it was, “of course, Dr. Hippolytus Zing, himself.” [2]

Harry Keeler wrote more than 80 books, and has an active fan-base (or probably “fan”-base) for his unique style. The Collins Library reprinted another classic Keeler work The Riddle of the Traveling Skull, which was well-chosen as an exemplar of his style. [3] Meanwhile, publishers-of-the-odd imprint Ramble House has reprinted all of Keeler’s novels.

Do you need this book? We’re partial to Finger, Finger! because it’s where we got our start with Keeler, but many titles would fill out the empty spot on your shelf just the same. In addition to titles already mentioned, consider The Mystery of the Fiddling Cracksman, or the Ramble House original, The Case of the Two-Headed Idiot. You can’t go wrong. Do you need to read this book? Yes. We’ll admit that the book doesn’t reward a close reading, but there’s something exhilarating about reading page after page of batshit-crazy prose. 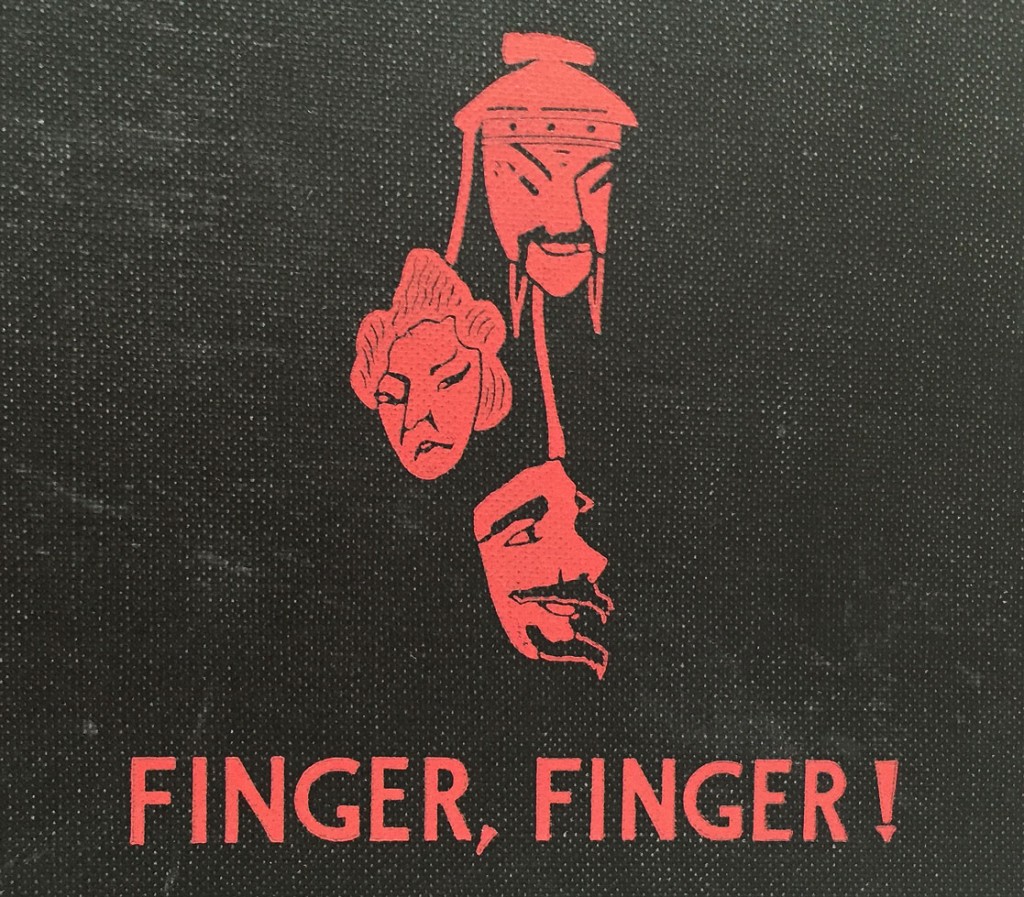 [1] It appears that Keeler occasionally built whole books out of padding. Often, he’d write books longer than they had to be, cut out entire sections which he called “the Chunk,” then write entire books around the “Chunk” which then produced another “Chunk” and so on. He was also fond of inserting short stories written by his wife by having characters pick up a book in the context of his novel and reading the story.

[2] Another spoiler: We’d be remiss if we didn’t mention our favorite ending to a Keeler book from X. Jones of Scotland Yard. The book itself is in the form of a case file, with “documents” instead of chapters. Many of the documents are photographs (including one of Harry Keeler, who, incidentally, looks crazy). The book has no real narrative thread, but inasmuch as there are clues to the killer’s identity, it’s implied throughout that the murderer is the Flying Strangler-Baby who is actually a midget flying an autogyro. However, on the last page of the book, the real killer is revealed: “He was, of course, Napoleon Bonaparte, Emperor of France!” As near as we can tell, that’s the only time Napoleon is mentioned in the book.

[3] Skulls, and skull-related things (like trepanning!) frequently appear in many Keeler works.