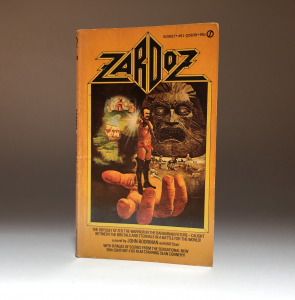 Zardoz is the re-novelization of a movie that was memorable for all the wrong reasons.

The goofy title. The giant floating papier-mâché head giving orders and life counseling to a bunch of guys wearing smaller versions of the papier-mâché head over their own heads. Sean Connery—at the time having played James Bond in recent memory—sporting a Cheech Marin mustache and trading in his tuxedo for an NSFW-ish red diaper, matching bandoliers, and hip-high leather boots. It’s memorable. It’s hard to imagine anyone who’s seen the movie (or even the trailer) forgetting it.

Dig a little deeper into the movie’s world via the book and it’s no less weird — though you’d be forgiven if you found it less memorable. The book follows the movie closely, telling the story of Zed and his adventures first doing the will of the giant head, then bringing down the chatty, fun-free society of deathless Eternals it represented. The book closes on a novelistic time-lapse after Zed has lived out his days in a cave with Consuella, an Eternal he met along the way.

John Boorman, the writer, producer, and director of the movie Zardoz, mentions in a preface to the novelization that he originally wrote the movie as a novel, then worked it into the screenplay, then worked that, with the assistance of Bill Stair, back into book form to “offer an interpretation of the film.” So then, caveat emptor.

Do you need to own this book? Those with a well-groomed science fiction catalogue or a deliberate collection of oddities will get some pleasure out of running across it on their shelves. Do you need to read this book? Gary Shteyngart found something to love in it, so perhaps. Roger Ebert ended his not-glowing review of the movie with “…it certainly will age you by two hours.” The book is a slim 128 pages, so it will probably do about the same if you decide to pick it up. 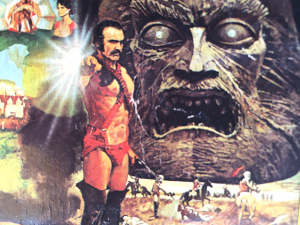