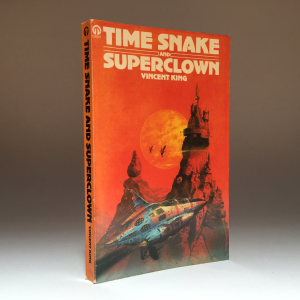 When you hear the words “Time Snake and Superclown,” what pops into your head?

We folded this book into the library on the merits of the title. To the extent there’s conventional wisdom about Time Snake and Superclown it’s that the book itself is as crazy as the title. That’s absolutely true, period. However, it’s surprising in that the book is absolutely serious. It’s not deadpan, funny, or tongue-in-cheek, but actually serious — and kind of a bummer, leavened somewhat by the insane plot and bizarre narrative voice.

We’ll be honest and say the title had us hoping for a buddy tale. [1] Freebie and the Bean, Butch Cassidy and the Sundance Kid, Starsky and Hutch, Holmes and Yoyo, but in space. Maybe something along the lines of, “Hey, Superclown — punch it!”

Alas, no, but we weren’t disappointed. The story is told from the point of view of Time Snake, a Watcher capable of transcending time and space but out of touch with his character motivation and what’s going on around him. The text is full of phrases like, “I opened my mouth, to speak, I suppose,” and “…he couldn’t understand why I couldn’t understand and later, when I thought about it, I couldn’t blame him. I just grinned, I didn’t understand and that was that.” [2]

The dreamlike disconnect in the point of view is all the fun, though: it allows for plot points like Time Snake being shot in the face by a lemon-scented girl with a small raygun — the effect of which is to give him a white greasepaint covering and a clown nose that inflates and deflates with a farting noise — but Time Snake doesn’t notice until well into the next chapter that his pants have also disappeared. The whole book is like this.

Time Snake is also a poet. At one point, he observes, “My hands were like bananas.” At another point he has a beautiful reminiscence, “But really I was thinking about that smelly meat stirring in the waves…”

Do you need to own this book? Yes. You won’t be shocked to hear that there wasn’t a hardcover edition. We’ve never seen a copy, but the book was apparently published in France under the title Superclown et le serpent du temps, which has a nice ring to it. The book’s goofy reputation and awesome title mean you’ll pay a premium for having the book on your shelf, but it’s worth it. Do you need to read this book? Yes. His hands were like bananas.