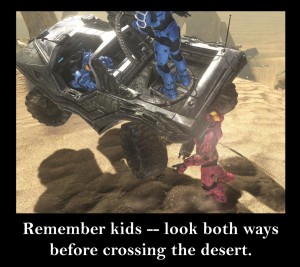 The Halo franchise follows the story of Master Chief, a super-soldier called a Spartan. Master Chief’s real name is John-117, although his face is never revealed, due to the fact that he is constantly wearing a suit of futuristic armor. Halo 3 is the conclusion to the original trilogy of Halo games. The first three Halo games are the story of Master Chief’s struggle to stop an alien civilization called the Covenant from activating an ancient super weapon that will destroy all intelligent life in the galaxy. However, there is another threat to the galaxy besides the Covenant. A parasitic race called the Flood is infecting all living creatures and mutating them into one’s worst nightmare. Halo 3 begins when the Covenant has invaded and controls Earth, and it is up to the Chief to stop them and also end the Flood once and for all.

The gameplay of Halo 3 is very straightforward. There are no “side quests,” no “leveling up” except in multiplayer, and the only thing the player has to do is simply move forward and kill the bad guys. Occasionally it is hard to tell where the player has to move his character, but otherwise the mission is pretty simple. Halo 3 is a type of game called a “first-person shooter,”(or FPS) and what that means is that instead of the view of the character you are playing as is from the side, or behind the character, it is like you are looking through the eyes of that character, with arms and a weapon visible.

This was my first FPS game I ever owned, and I enjoyed it a huge amount. It was released in 2007, but the graphics still hold up today, and I highly recommend getting it at some point. If you want to really get into Halo, then you can buy the Master Chief Collection, which is a grouping of Halo 1 through 4, along with multiplayer games.

For parental guidance, see below:

Blood and Gore- 5: Mostly aliens being killed. The player can kill his teammates, but this will incur their wrath and is not encouraged. Green and blue blood comes out of enemies and allies and splatters on walls and floors. Several enemies speak english, and a few will run away screaming. The Flood infects several allies, and what you will see is a small creature latch onto them and turn them into roaring zombie-like creatures that burst apart when dead. This is cartoonish, but still nasty. In multiplayer, you are fighting against other people playing the game, and so you will end up fighting other humans, and red blood is shown, although the other players are in futuristic armor and their faces are hidden. The player can be armed with several weapons, including shotguns, assault rifles, rocket launchers, sniper rifles, and alien laser guns.

Sex and Nudity- 2: No sex, but an A.I. named Cortana could be described as “scantily clad.” However, she is a hologram, and looks more like a blue silhouette with a face.

I’d say it is a game well-suited for 11 or 12 year-olds at the earliest, depending on their temperament.